The King Air 200 is extremely versatile. Seen below, as a lead plane in fire aviation tactics. 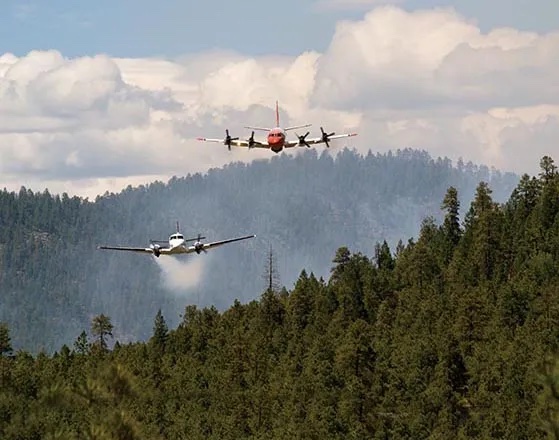 The King Air is the only platform the U.S. Forest Service uses for its lead plane missions, shown in this photo. The King Air releases white smoke to show the airtanker crew where they should begin dropping retardant to slow down a fire so firefighters on the ground can contain it.

The King Air is also being used in mapping wildfires. Two new aircraft have been delivered to the US Forest Service for mapping wild land fires. The Beechcraft King Air 260 can cruise at 356 mph at 35,000 feet, can take off in 2,111 feet, and has a maximum range of 1,980 miles.

The aircraft have the latest infrared (IR) sensing technology, the Overwatch Imaging TK-9 Earthwatch Airborne Sensor, along with legacy U.S. Forest Service sensors, that can accurately map wildfires, even at night and through smoke. The system can perform high-resolution scans of fires in a range of spectrums including thermal and infrared from 2,000 to 20,000 feet in altitude.

The TK-9’s speed of data delivery and automation of mapping processes will make it possible for the Forest Service to quickly release imagery to the public, if they desire. We are checking, but it may be possible for the system to live-stream video.

The King Air is and will continue to be an extremely versatile aircraft.